How Our Medical Office Can Help With Your Psoriasis

“Psoriasis symptoms can be mild and more of a nuisance than anything, or it may be severe and disabling. It can also be a major cosmetic concern. If you think you may have psoriasis, treatment is available to improve your symptoms and the appearance of your skin”.

Psoriasis is a chronic disease which causes the skin cells to build up very rapidly, resulting in red, dry and itchy patches that can be quite sore, or thick silvery-colored scales. The disease may have periods of remission during which symptoms are almost non-existent, alternating with periods in which you have a “flare” of symptoms. The condition is often associated with arthritis. When arthritis is present, symptoms can be quite severe.

What are the symptoms of psoriasis?

Our body contains cells called T cells. T cells are responsible for helping us to fight off infections. In psoriasis, the T cells mistakenly target the skin and cause skin cells to build up far too quickly. Normally it takes weeks for a skin cell to move to the outermost layer of the skin where it can be shed. In psoriasis, skin cells are created more quickly, and they also travel to the outer layer of the skin too quickly, where they build up into scales on the surface of the skin. What causes the T cells to malfunction is somewhat of a mystery.

If you have psoriasis, certain things may cause the disease to flare, or make your symptoms worse:

Are there complications associated with psoriasis? 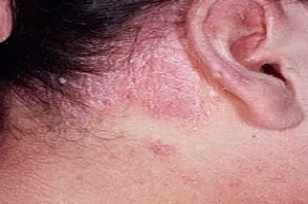 Yes. If you scratch affected skin, you may develop a bacterial skin infection. If you have psoriatic arthritis, your joints may eventually become damaged.

What can I expect if I come in for an appointment?

If you think that you may have psoriasis, you should make an appointment. You need a proper diagnosis before any treatment can be prescribed.

When you come in to see us, we will want to know about your past medical history, any allergies you have and what medications you are currently taking (if any). We will also want to know when you began experiencing symptoms, whether your symptoms are continuous or seem to come and go and what (if anything) makes your symptoms worse or better.

Once we have obtained your history, We’ll take a look at the affected area(s) of skin, looking for redness, dryness, cracking of the skin, weeping, crusting and other signs and symptoms. Psoriasis can sometimes look like other skin conditions such as atopic dermatitis, so we will need to look closely.

Treatment of psoriasis may include creams or ointments applied to the skin, oral or injected medications and light therapy.

If you think you have psoriasis, your first step is to make an appointment to come in and see us, particularly if you also have signs and symptoms of arthritis. We will work with you to get you a proper diagnosis. If necessary, we will refer you to a dermatologist. Psoriasis needs ongoing treatment and close monitoring to prevent complications. Make your appointment today.